Durban safari guide Paul collected our 8 passengers from a cruise liner, for a two day Durban Big5 safari. After pickup from the ship terminal, we began our Durban Big5 safari and proceeded to St Lucia for a 2 hour safari estuary boat cruise. The safari cruise on the estuary was very exciting with African fish eagles, 3 crocodiles and large numbers of hippopotamus. We were also very lucky to see a number of juvenile bull sharks breaking the water with their dorsal fins.

We then made our way to Hluhluwe-Imfolozi Big5 Safari Park. We had some great animal sightings on the way to the camp. Two of the Big5, buffalo and rhino where spotted along with impala and zebra. After check in all the guests departed on an afternoon game drive in open safari vehicles. This in an extra drive provided by the camp. Sightings were great, with happy guests returning to camp. 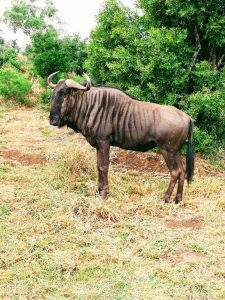 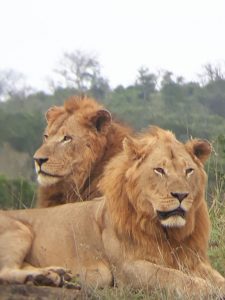 Next Morning we set out for an early safari game drive. Starting with a breath-taking sunrise and driving until breakfast. A great start with a large herd of elephants just outside the camp gates. Animals were plentiful and the highlights were 6 lions playing on a hillside. After breakfast we drove out of the safari park heading to Emdoneni Wild Cat Rehabilitation Project. Just before the exit gate, we were confronted by a large elephant bull in full musth. He gave us a little run around, very exciting!

The cat sanctuary was awesome with some new cheetah cubs being introduced to the public. Their first interaction with people. As with all great tours this one had to end, so back to the ship in Durban harbour in time for departure. Another great Durban Big5 safari completed and onto the next one!