Durban Safari guide Paul took a family of four on a Big5 overnight safari. Starting our three day Big5 safari in the early morning, we headed to our first stop Emdoneni Wild Cat Sanctuary. We all had lots of fun playing with serval kittens and getting some great shots of the tame cheetah. The cats at Emdoneni are part of a breeding project to help replenish numbers in other areas.

We left Emdoneni and continued on to the Hluhluwe-Imfolozi Big 5 Park. As we entered the safari park we found white rhino right next to the road. A rhino cow with her very inquisitive calf were first. The little calf was in a very playful mood and charged up the road at us then turned and charged off again, very funny.

The grazing in the safari park is still really good so a great time for safaris. Big herds of buffalo crossing the road and wildebeest, zebra and rhino on the road side.

The first day we were battling to find elephants but had a really awesome Tower of giraffe. Tower is the collective name of a group of giraffe. While watching the giraffe a big bull elephant came out of the bush and chased some zebra grazing nearby. 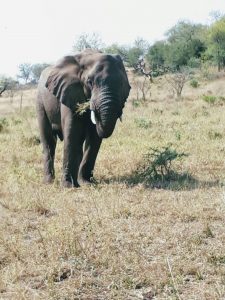 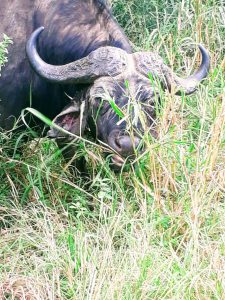 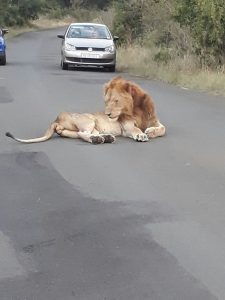 Next morning with an early start we set off on a safari game drive in search along the waterways. We came across approximately 60 elephants all playing in the river and then crossing over to our side. When they moved into the bush I drove around to the animal paths that they use come onto the road. I positioned the car correctly, turned off the engine and waited. This turned out very nicely as the whole herd came out and moved slowly across the road. We got some fantastic shots of these majestic animals.

The estuary safari boat cruise was great with crocodiles, large numbers of hippos and some great birds like giant kingfisher and fish eagles.

The family had an early flight so we shot off back towards Durban and said our goodbyes at the airport.