Durban safari guide Paul, picked up a mother and daughter and headed off to Hluhluwe-Imfolozi Big5 safari park.

I decided on driving the southern side of the safari park. Approaching the gate I spotted a huge lone buffalo bull high up on a hill, he was very far so we didn’t linger too long. Coming into the gate parking we saw an elephant bull, drinking at a small water hole just 60 meters away. What an exciting experience standing in a parking lot 60 meters from one of the “Big 5” All very safe of course. I closely monitored the behavior of the animal.

Entering the main gate of the safari park, I decided to head further south to look for large herds of elephants near the Imfolozi River. En-route we saw many plains game, zebra, wildebeest, impala and a few lone buffalo bulls (Dagga Boys).

Just past the river 3 white rhino were grazing on the side of the road. I approached slowly turned the vehicle off and we sat and watched as they crossed the road 5 meters from us and continued on their way.

Sticking to my chosen route I circled around toward a popular water hole expecting to find more rhino there. True to form they were there, 5 rhino looking for the best spot to rest. Bumping each other for the shady spot. While watching them I noticed something else. 3 cheetah! A mother with her 2 cubs! Only about 50 meters off the road in a clearing. Perfectly positioned so we could see them well. We spent a while there taking pics of rhinos and cheetah. 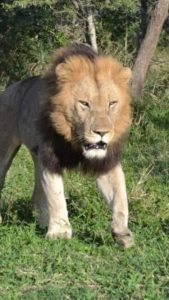 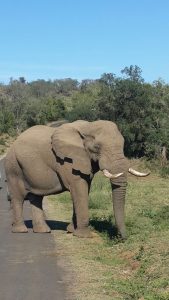 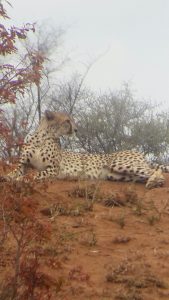 We had to move on. Big5 Day Safaris are great but time is limited. Onward we went stopping at one of the picnic sites for a snack.

There were a few people standing in the far corner looking at the river so we went to see. 3 lions lying on the river Bank also not far off. A big dark maned male, a large female and a very fat cub. They had clearly just finished eating and were lazing the day away. The little cub, about 6 months old had gorged himself and could hardly walk.

The rest of the day went well with plenty zebra some giraffe and many other plains game. We didn’t find the big herd I was looking for but did see about 20 elephants from a distance.

What a great time to visit Durban.

All in all a fantastic Day Safari from Durban

The above Durban Big5 day safari can be found here