Been a really busy last two months of safaris and tours around Durban. Below is another safari adventure conducted by Durban safari guide Paul.

A nice early pick up with a little rain in the early hours at 6am. We set off for an awesome Big5 Day Safari at Hluhluwe-Imfolozi Park.

This is a safari day tour so we headed  directly to the safari park.

We arrived at 8:45am and after formalities entered for our closed vehicle Big5 safari.

First in we spotted a squeal of warthogs. They were grazing and rooting on the side of the road, this mother has done very well. She had 9 hog-lets last year and still has 7 now. With leopards in the area and this being their favorite prey that’s a good result.

While we watched, I noticed 3 rhino close to another road in the distance. I quickly took an exit and made my way there. We got there in time to see a rhino calf squealing at it’s mum for a drink of milk. She eventually obliged, so he set in, lying flat on his belly to reach. 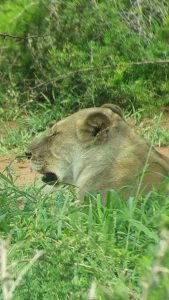 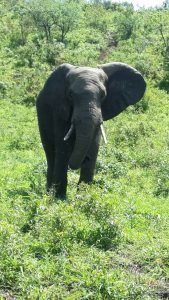 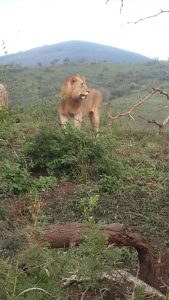 Driving through to one of the areas where I was looking for lions, we saw many other plains game. giraffe, zebras, buffalo, warthogs, and baboons were all around.

We did find the lions lying in tall reeds along the riverbank. While watching, a few nyala came along, the lions started stalking had a chase and missed. They went straight back to their reeds to sleep it off. About 10 minutes later a herd of zebra arrived. After looking carefully at the reeds the stallion led his mares down to the water. The lions sprang their trap, zebra scattered everywhere and the lions steered one into an ambush. Jumping on her, they pulled her down into the reeds. Then everything went quiet, very exciting!

We continued on to see elephants and lots of giraffe on the side of the road and one very upset buffalo bull who caused me to back up a bit to give him space.

Back to Durban and the rain with awesome memories of a great Big5 safari tour!